Berne. The President of the Swiss Confederation, Simonetta Sommaruga, received the Tunisian Foreign Minister, Taieb Baccouche, on a courtesy visit on Tuesday, 13 October 2015. They discussed the state visit to Switzerland by the President of Tunisia, which is scheduled for November of this year. Mr Baccouche also met with Federal Councillor and Head of the Federal Department of Foreign Affairs Didier Burkhalter for a working visit in Bern. 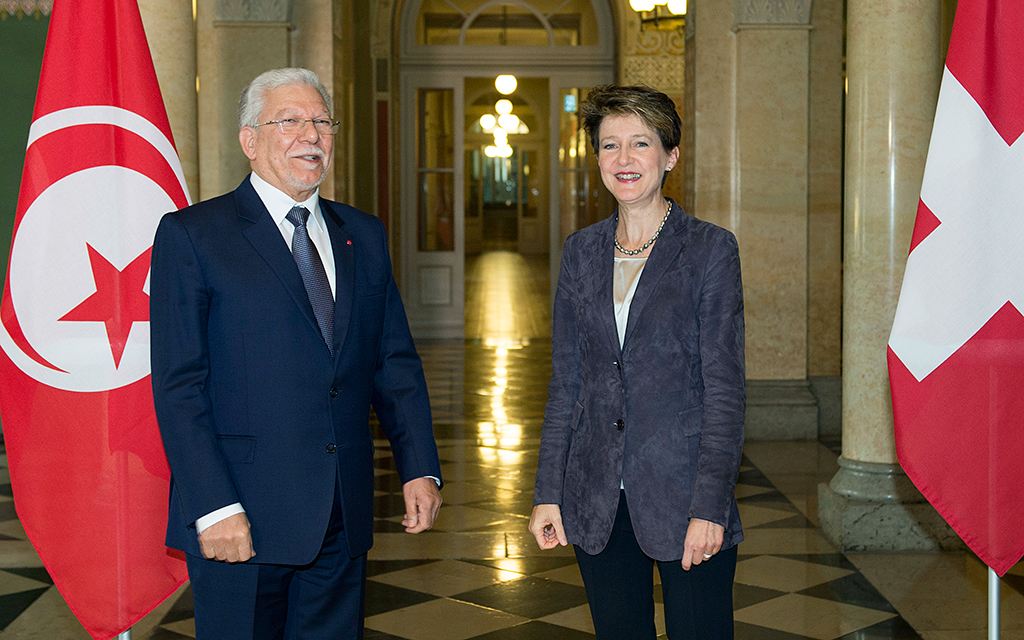 Mr Burkhalter received Mr Baccouche at the Bernerhof. During their meeting, both ministers highlighted the fact that relations between Switzerland and Tunisia have intensified since the Tunisian revolution of 2010-2011, with Mr Burkhalter referring to the state visit to Switzerland by Tunisian President Beji Caid Essebsi, due to take place in November 2015, as proof of the excellent ties between the two countries.

At the meeting, Mr Burkhalter also reiterated that Tunisia is a partner in Switzerland’s 2011-2016 programme for North Africa. Totalling around CHF 16 million in 2014, Switzerland’s commitment in this regard centres around, one, the transition towards democracy and human rights, two, economic development and employment, and, three, migration and protection. To promote inclusive regional development and to combat poverty, the programme focuses on disadvantaged regions in Tunisia. The Swiss embassy in Tunisia has an office in Kasserine.

Continuing the bilateral theme, Mr Burkhalter and Mr Baccouche discussed the assets of former President Ben Ali and his entourage that are currently frozen in Switzerland as well as different procedures that are ongoing in this context.

At the multilateral level, Mr Burkhalter and Mr Baccouche talked about various issues of current international interest, such as the crisis in Tunisia’s neighbouring country, Libya. The fight against violent extremism was another topic of discussion.

In the early afternoon, Mr Baccouche paid President Sommaruga a courtesy visit during which Ms Sommaruga, who is Head of the Federal Department of Justice and Police (FDJP), referred to the upcoming state visit by President Essebsi as an outstanding opportunity to reinforce friendly relations between Switzerland and Tunisia.

Ms Sommaruga mentioned the migration partnership that has been in force since 2012 as an example of how well the two countries are already cooperating with each other. "This partnership allows us to address migration issues that are important to our respective countries and central to delivering solutions for the Mediterranean region," she said, stressing that close collaboration between European and African countries would continue to be key in overcoming future challenges.

During her meeting with Mr Baccouche, Ms Sommaruga also praised the decision, announced on Friday, to award the Nobel Peace Prize to four civil society organisations in Tunisia: "It is a further major sign of international recognition for the progress that Tunisia has made in its efforts to promote the rule of law and democracy."