Bern. On Monday, 9 March, President Simonetta Sommaruga, received the Palestinian president, Mahmoud Abbas on an official working visit to Bern. Discussions focussed on the situation in the Middle East. The Palestinian president also held talks with Federal Councillor Didier Burkhalter, the head of the Federal Department of Foreign Affairs (FDFA). 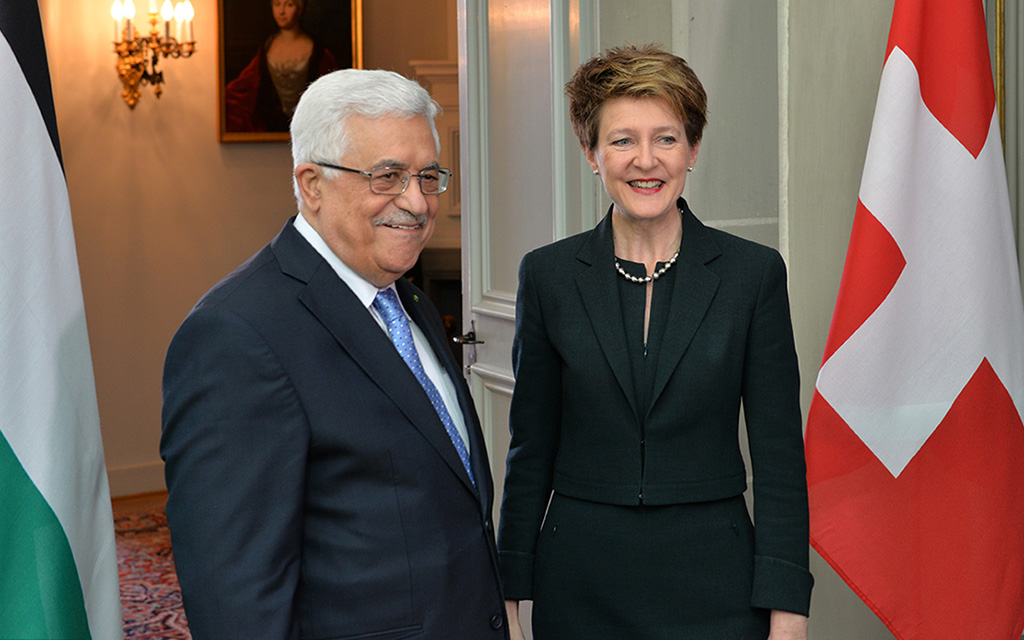 During his talks with President Abbas, Mr Burkhalter enquired in particular into the state of the inter-Palestinian reconciliation process between the PLO and Hamas. Switzerland is acting as a facilitator in the process. The Palestinian president welcomed this involvement.

President Abbas was then received by President Sommaruga, the head of the Federal Department of Justice and Police (FDJP). Mrs Sommaruga recalled that in keeping with its tradition of providing good offices and promoting international law, Switzerland has been involved for several years in facilitating a negotiated, just and lasting peace between the Israelis and Palestinians.

Switzerland actively supports a two-state solution and in this context is committed to assisting in the restoration of Palestinian unity. These two themes were also discussed during the meeting between President Sommaruga and President Abbas. Following the meeting President Sommaruga expressed her satisfaction regarding President Abbas’ support for the roadmap that Switzerland – among others – was involved in drafting. The roadmap aims to consolidate the integration of the civilian administration in Gaza.

In the course of the meeting with President Sommaruga, President Abbas expressed his gratitude to Switzerland regarding the Conference of the High Contracting Parties to the fourth Geneva Convention, which took place last December. At the conference, representatives of the 128 High Contracting Parties adopted by consensus a ten-point declaration recalling the applicability of international humanitarian law (IHL) in the Occupied Palestinian Territory, including East Jerusalem. Switzerland is the depositary state of the Geneva Conventions.

Mr Abbas’ last official visit to Switzerland was in November 2012. On that occasion Mr Burkhalter and Mr Abbas agreed to establish a political dialogue at various levels and hold periodic meetings in Bern and Ramallah to discuss progress.