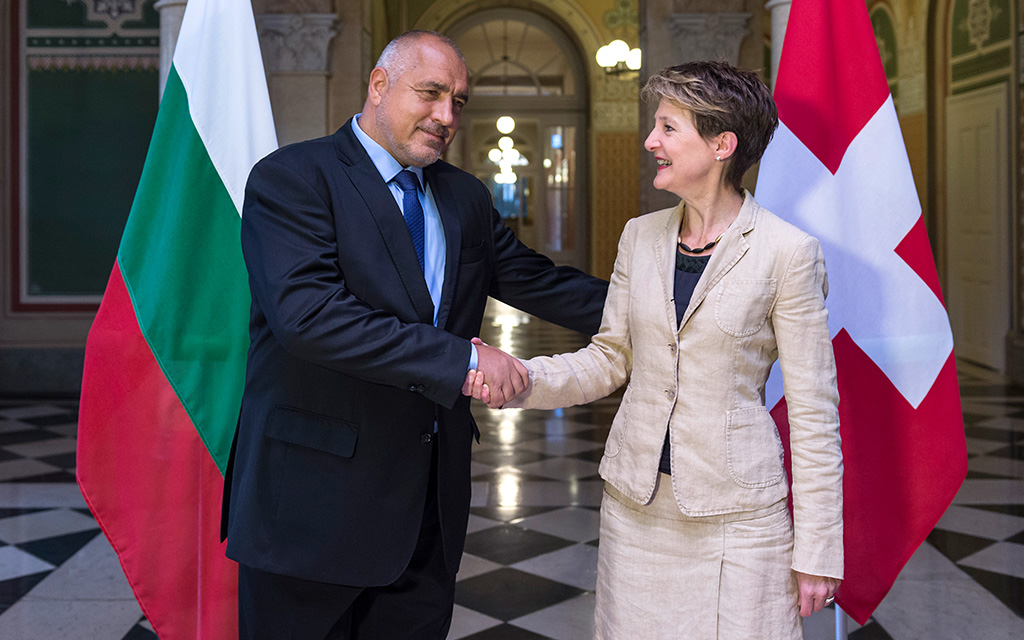 In her discussion with the Bulgarian prime minister, Ms Sommaruga underlined the value of good, stable relations between Switzerland and the European Union. Maintaining close ties brings advantages to both sides. However, until 31 May 2016 restrictions on entry will remain in place for citizens of Bulgaria and Rumania, the most recent countries to join the EU. Around 5900 Bulgarian nationals currently live in Switzerland.

Following the vote of 9 February 2014 on mass immigration, the Federal Council aims to bring about an amendment to the Agreement on the Free Movement of Persons signed with the EU so that Switzerland has control over immigration across its borders. At the same time, the bilateral path should be reaffirmed and renewed. Ms Sommaruga explained the Federal Council’s policy on this matter. Bulgaria has been a member of the EU since 2007, and in the second half of 2018, it will take over the European Council presidency for the first time.

President Sommaruga and Prime Minister Borissov praised the positive developments in bilateral relations between the two countries, which have worked more closely together in recent years. The discussion on migration policy focused on the EU’s proposal to introduce allocation quotas as a joint solution to dealing with refugees.

Bulgaria is not yet a full member of the Schengen Area, but applies the provisions of the Dublin Regulation, which establish unified criteria for assessing asylum applications. In its position on the edge of Europe, Bulgaria has to cope with a particularly large influx of refugees. Prime Minister Borissov stressed that this situation posed serious challenges for his country. President Sommaruga underlined that these challenges could not be met at domestic level only, and that it was a matter of urgency that Europe responded with a consistent, coordinated policy.

In 2014, the volume of trade between Switzerland and Bulgaria was worth 582 million Swiss francs. Switzerland primarily exports pharmaceutical products, machines and chemical products to Bulgaria, and the main imports are textiles, clothes and machines. As of the end of 2013 Swiss companies had invested a total of 613 million francs in Bulgaria, and created 8900 jobs.

The commitment period for Switzerland’s enlargement contribution in favour of Bulgaria came to an end in December 2014. Switzerland has contributed 76 million francs to projects which promote economic growth, and to projects in the fields of social security, environment protection, public security and civil society.

Other members of the Bulgarian government who took part in the talks in Bern were Lilyana Pavlova, Minister of Regional Development and Public Works, Ivaylo Moskovski, Minister of Transport, Information Technology and Communications and Economics Minister Bojidar Loukarsky.